Competition, Regulation and Valuation – The Impact

In the last post, I talked generally about competition, regulation and valuation, but did not offer any data to illustrate.  The valuation data, shown below, are dramatic.  The lines plotted in the graph are paths of wealth per dollar invested over the period from January 1, 2013 through May 9, 2018.  Recall that a path of wealth differs from a price line because it also accounts for the impact of reinvesting dividends.  Including dividends is important to avoid comparing apples and oranges when looking at the performance of stocks, because some do and some do not pay dividends.  In the present case, none of the FANGs pay dividends while both Verizon and AT&T pay substantial dividends.

The results shown in the figure are striking.  Whereas the FANGs, who thus far have faced little competition or regulation, have appreciated dramatically, with Neflix rising a remarkable 2,500%, Verizon and AT&T have been stuck in neutral.  The only return investors have received are the dividends.  In fact, in the case of AT&T the stock price at end of the period was actually less than at the beginning, so the total return was less than the dividend yield.  The point is that there is a limit to how far such revaluation can go.  As the later Herbert Stein said, if something cannot go on forever, it will stop.  As the regulatory environment evolves, Google and Facebook may start to look more like Verizon and AT&T.  With their current high valuations, that is a reason for investors to be cautious. 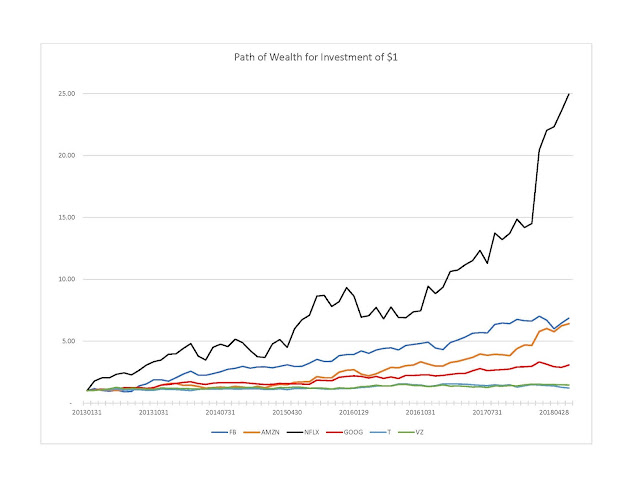